Participants included undergraduate and postgraduate students, staff members from the NWU and elsewhere as well as an international visitor from Italy. The participants enrolled in groups of 3 to 5 members. The challenge was to address one or more of the 17 Sustainable Development Goals set out by the United Nations by using the Raspberry Pi 3 model B. Groups were allowed to complete any prior work leading up to the hackathon and received the Raspberry Pi's on the 24th of October to begin working on their projects.

Ultimately three groups took part in the hackathon, and all had different ideas that they wanted to achieve:

One of the groups who joined the Raspberry Hackathon consisted of Dr Hennie Esterhuizen en Gawie le Roux, both from the NWU IT Department, and Lukasz Polenski, a visiting IT specialist from Italy. The team set out to contribute to the United Nation's sustainable development goal number 4 - to promote quality education. In order to do this, the team wanted to test the feasibility of using a Raspberry Pi in conjunction with open source software to establish a video conference service that can be used for geographically distributed lectures and two-way communication between lecturers and students.

Three Pi's were used and loaded with the UV4L (User space Video4Linux collection) image. One of the Pi's were utilised as a streaming server, while the other two remaining Pi's were configured as endpoints that joined a virtual meeting room using the WebRTC protocol. WebRTC is a free, open project that provides browsers and mobile applications with Real-Time Communications (RTC) capabilities via simple API’s.

Some critics might observe that there are already a variety of free cloud-based video conference applications available from the likes of Skype, Google Hangouts and Facebook Messenger and that the team did not contribute anything new with their project. However, the team enjoyed the challenge to work with the hardware, operating system and the open source software to get the demonstration working successfully. And as an added bonus, the team members had the opportunity to learn from each other and build a strong South-African Italian partnership. 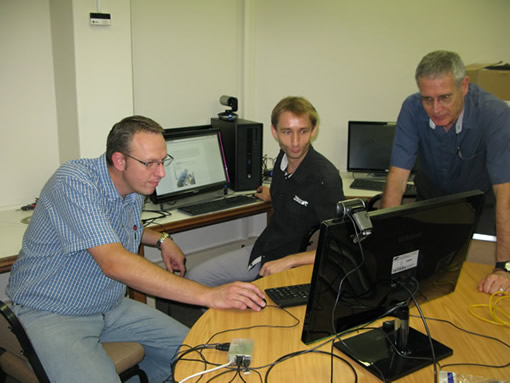 The second group consisted mostly of undergraduate NWU students, Beyers Barnard a 4th year law student, Frederick Koen Back-end Web Developer, Crystal Van Niekerk a 4th year law student, Dewald Du Toit a 2nd year Bsc Computer Science student, and Ricardo Vertenten a first year at CTU.  They were joined by Paul Bosman, a 4th year BEng electrical and electronic student at NWU. The group set out to create an automated greenhouse system with a reasonable level of Artificial Intelligence. The system communicates with a web page, designed to display all the relevant greenhouse data. This website would typically be the owner’s control room for the agricultural environment inside and outside the greenhouse structure. The system makes decisions based on data received from all the sensors of the greenhouse that monitor the atmospheric environment within the greenhouse. All variables are visualised graphically on the web page and all historical data is kept for future analysis.

Furthermore, they proposed the idea of this system being able to communicate with local information systems, such as shops and fresh produce markets. This level of information would then determine a product’s demand and decide when and where a product should be harvested, planted or halted. All of this in a more sustainable manner with little waste of resources. The prototype is currently being explored further for potential commercialisation. 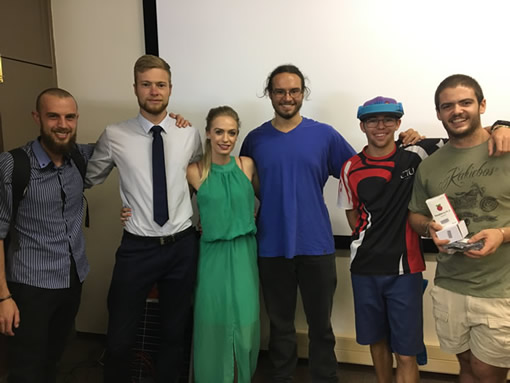 The third grouping consisting of NWU staff members Dr. Andre Goodrich, Juan Steyn and a postgraduate student Gustaf Tempelhoff. The main aim of the project was to create a user friendly system for communities to tell their own stories and history without having to be taught a whole new set of skills. Poverty stricken communities do not have access to the needed infrastructure or in many cases possess the necessary skill set to get their story out there. It builds on the Byderhand project on site specific literature and when completed will form part of a mobile digital museum of the Miederpark area in Potchefstroom.

The project makes use   of solar power and a capacitor as energy source to power up the Raspberry Pi.The setup utilises QR-codes, which enables the users to gain access to the multimodal texts on their mobile devices. This setup will enable anyone with a smartphone or mobile device to access the museum at no cost to the user in terms of mobile data or access fees. 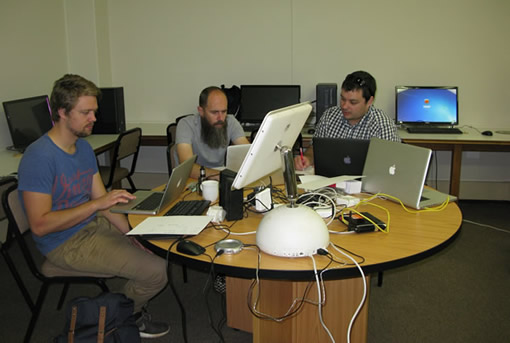 The two-day hackathon concluded on a high note with presentations from all participating teams. The panel of judges included Lappies Labuschagne, Ciellie Jansen Van Vuuren, and Martin Dreyer. The judging criteria were based on criteria   that was previously employed by the Software Sustainability Institute during their Collaborations Workshop 2016 Hackday. The greenhouse project and virtual museum walked away as winners. Each team member of the winning teams received a of the Raspberry Pi 3 model B as a prize. We are looking forward to a similar event in 2017.